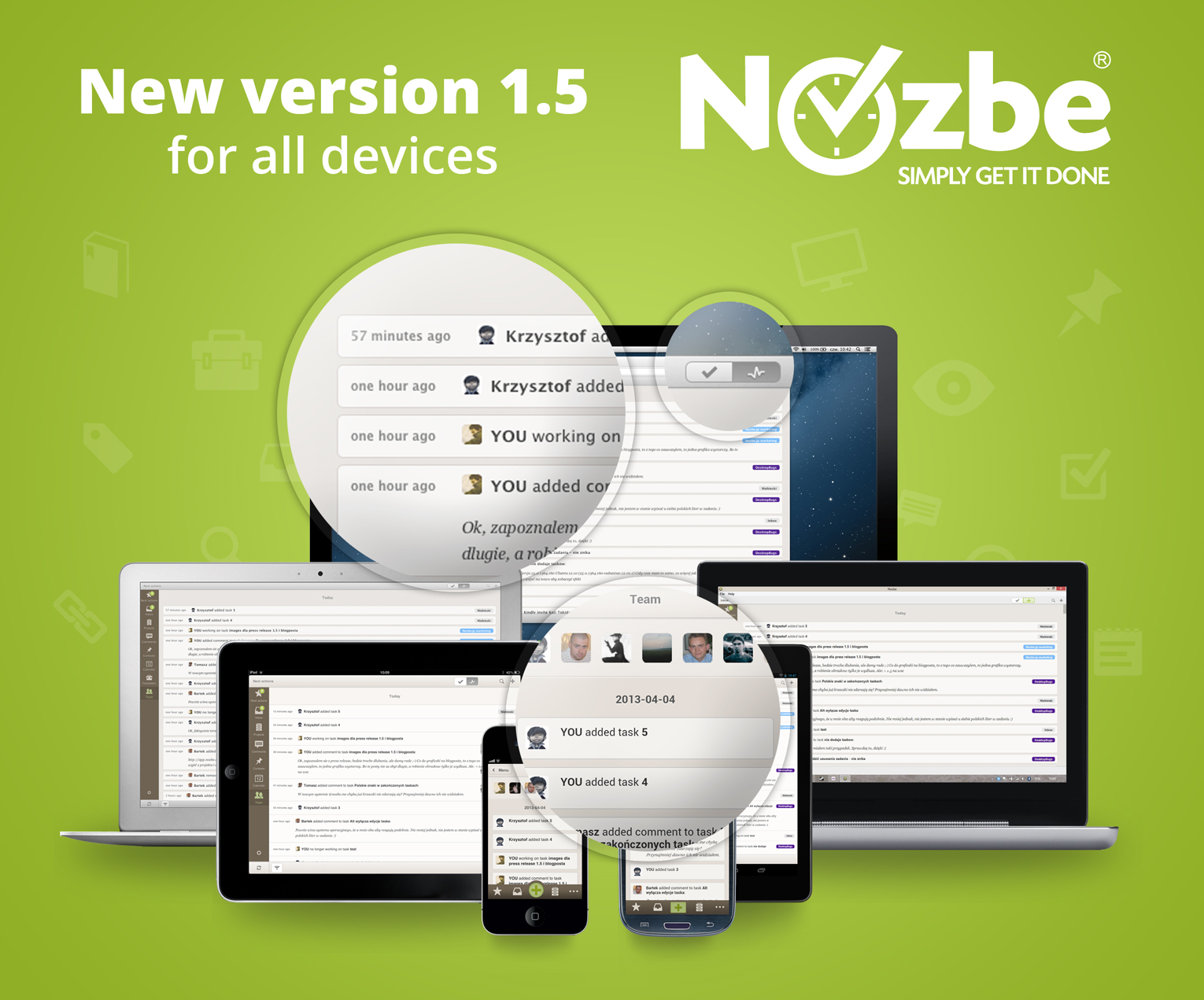 Believe me, this is a great moment for Nozbe and for me as the Nozbe founder. Finally, after spending most of the last year developing apps for all the important platforms, we’re ready to update these apps across the board and bring them on par with all the new features.

Over the last months we gradually introduced new apps but always one at a time with different version numbers. To avoid confusion we decided to put a new versioning scheme in place and today we’re upgrading all the apps to the newest version - 1.5 with all the latest features.

Get Nozbe 1.5 for your platform

Want so see it on video? Here it is:

And featuring for the first time ever:

All of the apps work offline - the web app is always ON!

As you know, all of our native apps can work offline (without Internet connection) and sync your data later.

The new web app works LIVE meaning, your data is automatically saved in Nozbe at all times. The new web app feels and runs as fast as our native apps, but is connected to Nozbe servers the whole time.

The old Nozbe web app will on be called “Nozbe Classic” from now on and you’ll still have access to it. You’ll be able to go back and forth between the new Nozbe web app and the Nozbe Classic - to make sure you get used to the new design and features. The new web app works across all the major modern browsers (Chrome, Safari, Firefox, IE9+…)

Get Nozbe for your platform!

What’s new in 1.5 apart from having all the apps together?

Glad you asked, here’s what we’ve been working on recently:

Get Nozbe for your platform!

This 1.5 release is huge and it’s really important to us, as it sets us with a very regular release cycle for all of our apps. This way you’ll always be up-to-date with your Nozbe apps and get a lot done thanks to our regular new features.

Version 1.6 with additional features is already under way (with enhanced Evernote, Dropbox and Box support and much more) and will be released next month. We are just getting started!

See related posts
See other posts
←Speed things up with Nozbe 1.6 - get things done faster :-) Happy and Productive Easter... and Nozbe 1.5 right after!→