How we use Nozbe - Software development.

As you all know Nozbe is the main application we use to accomplish our daily tasks. Developing such an app requires from us a great deal of workflow organization to maximize productivity. Nozbe helps us achieve this thanks to its great features. What can we say, we simply love it.

Development of current versions of Nozbe

We’ve just developed version 1.9.2 of Nozbe and to make our work as efficient as possible we were sharing two projects within our team and these are Nozbe 1.9.2 and Releasing 1.9.2. Take a quick look how these projects were organised.

This kind of project consists of typical technical tasks for our Programming Ninjas :-)

Every task in this project represents one of 2 things:

Thanks to the checklist and delegation features in Nozbe, we manage to work very smoothly with that. If a task requires some designing corrections to be made, we simply mark it on the checklist and then delegate it to our Chief Designer, Radek.

When these corrections are being made, we get them ready for testing. We are marking it again on the checklist and delegation goes to me (Product Manager). I can mark task as done if it works correctly or comment it with my feedback what else should be done and give back to one of our developers.

The second project mentioned before Releasing 1.9.2 is always created from template and it’s basically a simple checklist of stuff that should be done before we publish a new version. To give you a better view, here are some examples of tasks we keep in that project:

Currently we are spending a lot of time preparing the brand-new version of Nozbe, codenamed One Nozbe for you. We’ve got 3 projects for One Nozbe development:

This is our biggest project, because it contains a whole back-log of all features to be implemented in Nozbe 2.0. Every single task represents one feature. We use “time needed” parameter in Nozbe to estimate how much development time we’ll need for each feature:

Thanks to time estimation we can schedule exact amount of work for each week, verify our estimation and evaluate. To acomplish that, we have a regular meeting scheduled for every Friday where we assign tasks from One Nozbe Backlog to our Programming Ninjas.

Each task we evaluate contains comments that describe requirements for the feature and two checklists. First one, is for developer to check if he has access to every data available to start the development process and the second one is about the progress in general, where we get information such as if it is developed but not yet tested, etc. 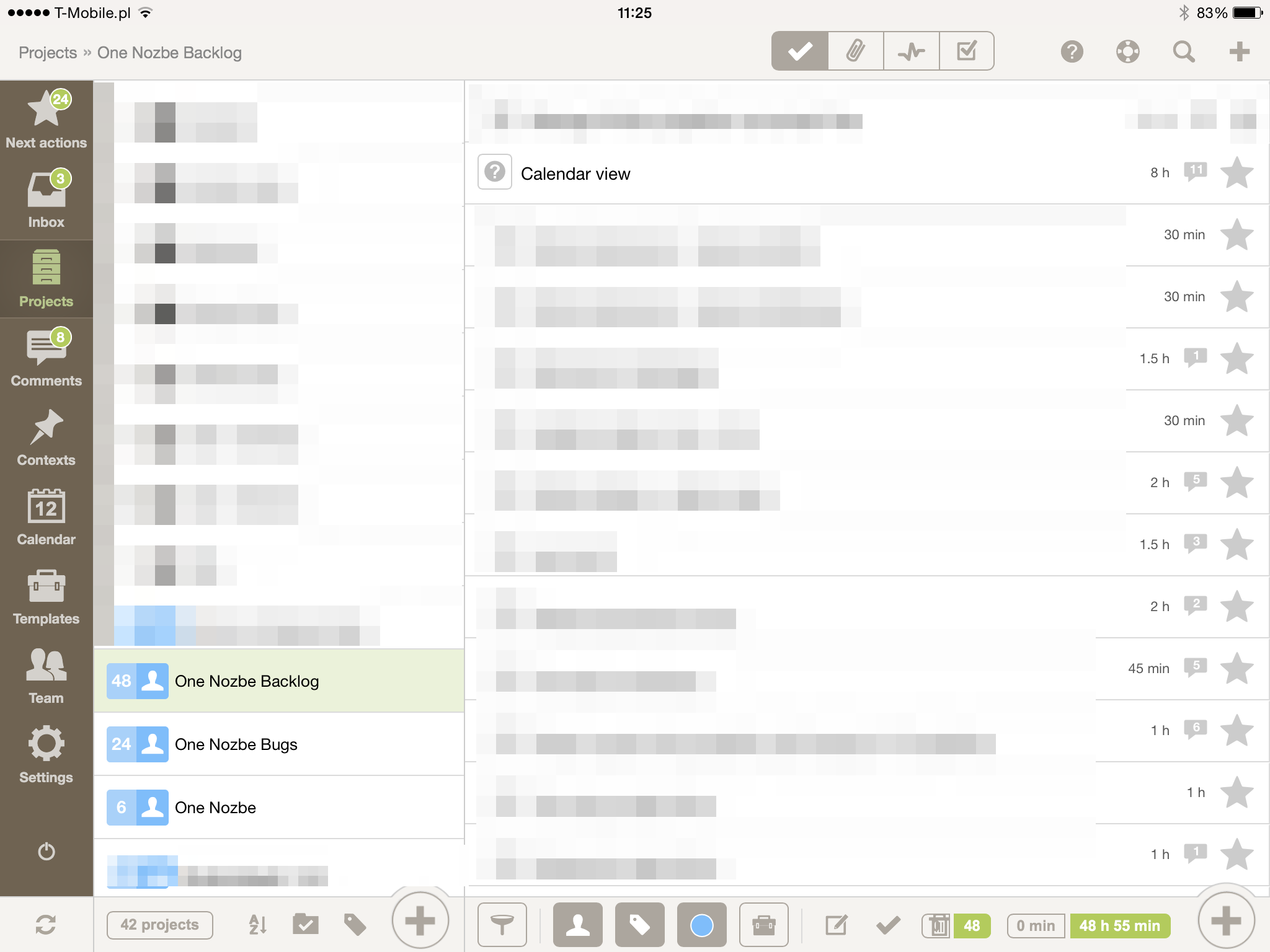 We have a separate project to track bugs in Nozbe 2.0. Each task in it represents one bug and contains comments with the description (platforms on which it occurs, how to reproduce it, etc.).

As a Product Manager, I can delegate some bugs to be fixed as soon as possible if those are perceived as critical. However our developers are so proactive, that they take up some actions on their own :-)

This project contains tasks not directly related to development but those other tasks that will eventually need to be done. Every team member can create task there if they need to. To give you some examples in One Nozbe project we may find:

Some of these tasks require being discussed with our CEO and we do it by connecting via FaceTime and using join.me session on iPad to share the screen. Thanks to these tools I was able to hear and see Michael drawing on his whiteboard comments about what we were discussing. What’s more, we shared list of specific topics to discuss via join.me on our Macs. 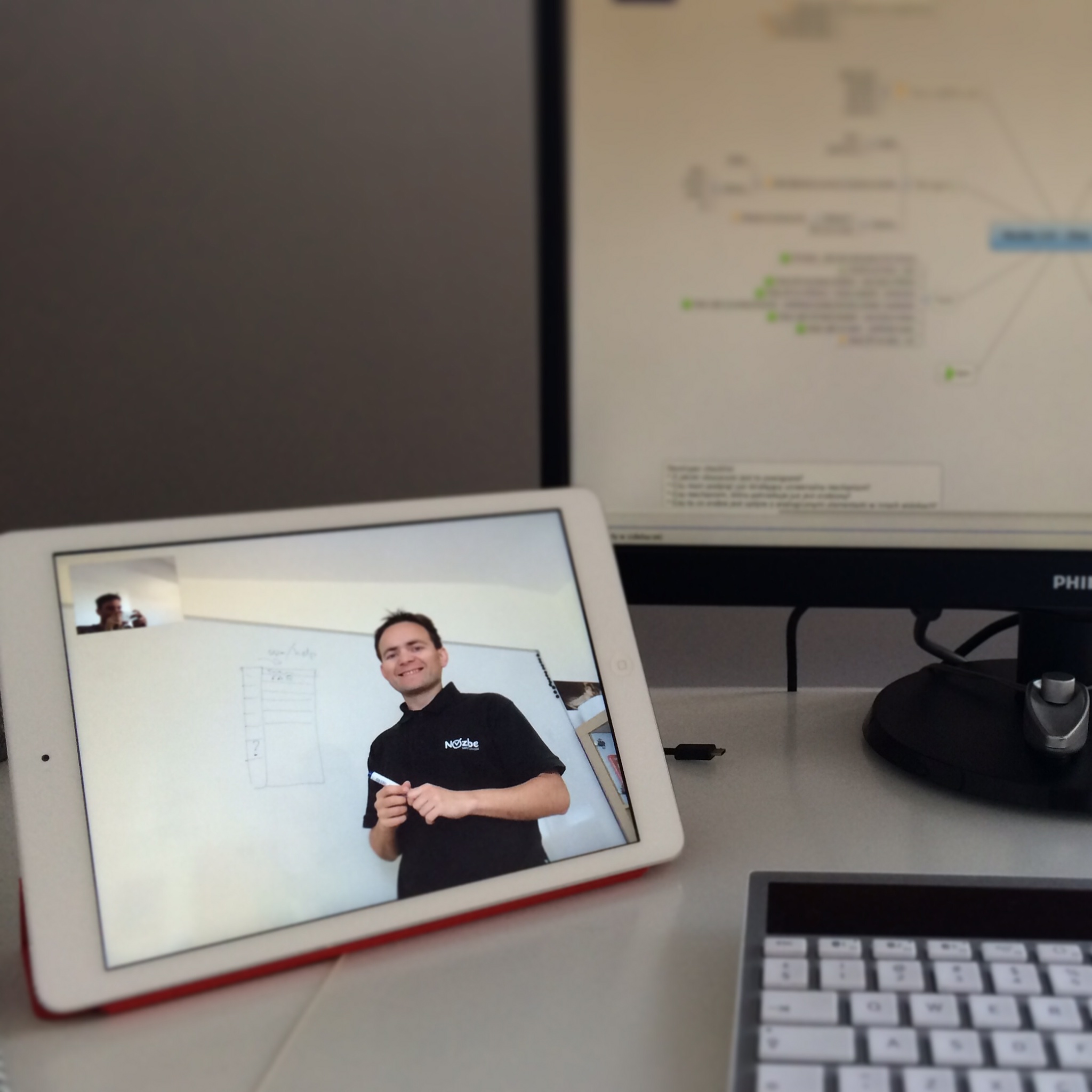 The output of this brainstorming, such as photos of whiteboard and mind-map session, went straight to Evernote and Dropbox to make them easier accessible through Nozbe. Thanks to Nozbe integration with these great services I attached it as a reference material to the project and specific tasks in our backlog. It worked perfectly!

I hope you have now a better view on how deleopment takes place here at Nozbe :-)

See related posts
See other posts
←Productive! Magazine No. 19 with Chris Brogan - read free and get inspired Mobility, Collaboration and Inspiration - the new focus for upcoming Nozbe 2.0 app that we call "One Nozbe"→