Today, we wanted to share some highlights from Nozbe 3.0:

It was back in August 2015 when our designer Hubert prepared a blogpost on our internal blog with a project of a new Nozbe logo. When Michael saw it he got a bit mad… because he realised how much he liked the new logo and that the change was necessary ;) I mean seriously! The new logo is so beautiful that Hubert was crying with tears of joy while drawing it. True story! ;)

The new logo is the icing on the cake of a new design. With Nozbe 2.5 and 2.6 we introduced some major changes to the app design. We brought a new font, new colors, new icons, refreshed side panels and task list appearance. The last part of the app that needed a redesign was the task details column. That is kind of a place when the magic happens. In this view, you comment tasks, delegate them and complete them. You simply get everything done over there. First attempts to tweak the task details design were made in April 2015 but we could not agree on how it should look like. After months of discussions and tons of sketches we finally got to the solution which, although not so revolutionary, really improves the user experience. 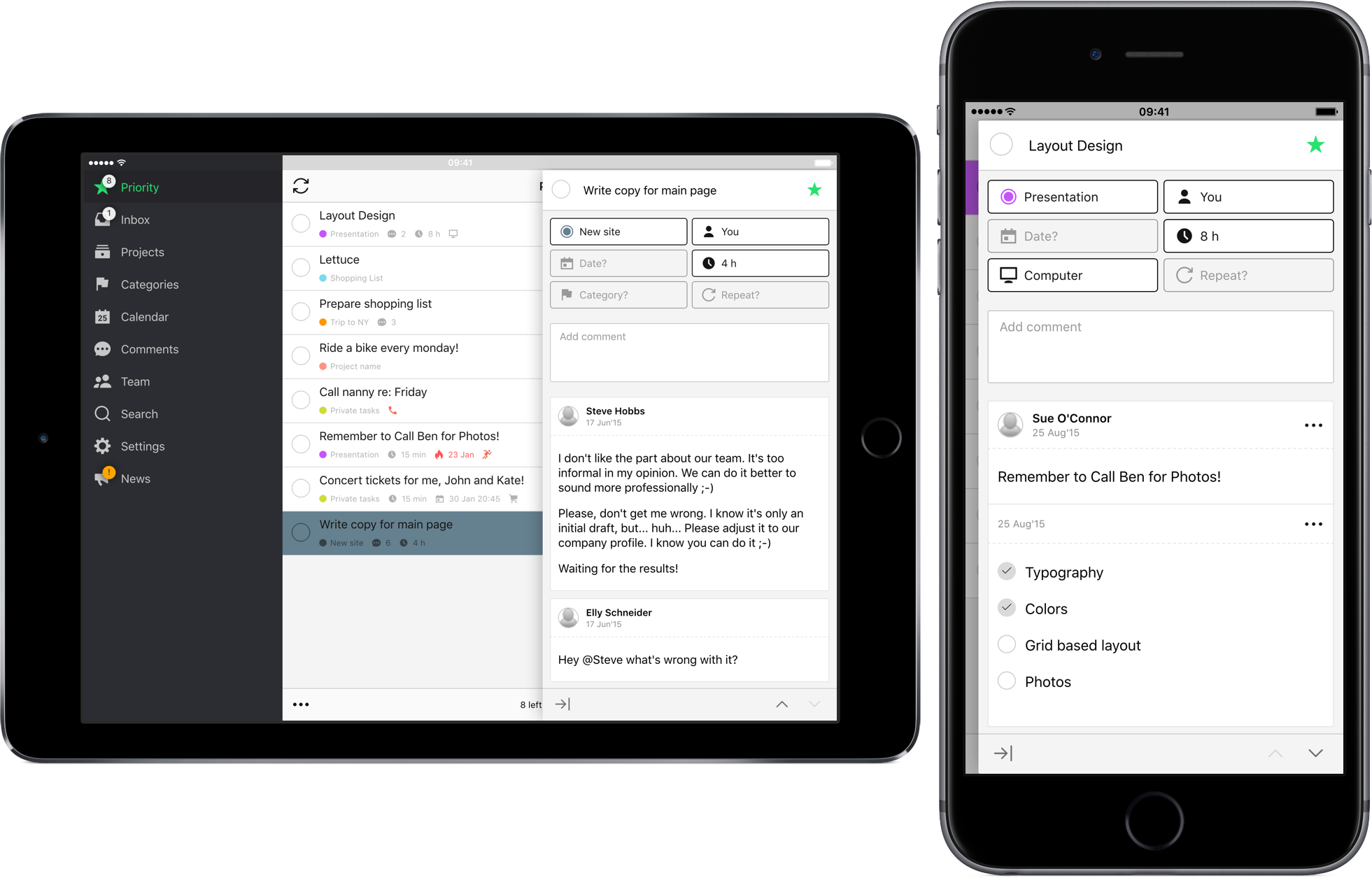 The real power of Nozbe is within its collaboration capabilities. With Nozbe 3.0 we will introduce Business accounts to make using Nozbe in larger teams more productive. First of all, Team Owner will be called Team Admin. He or she will be able to nominate another team member to be a Team Admin as well. This makes managing larger teams a lot easier. Nozbe PRO users will get 1 additional Admin. Nozbe Business will have unlimited number of Admins. 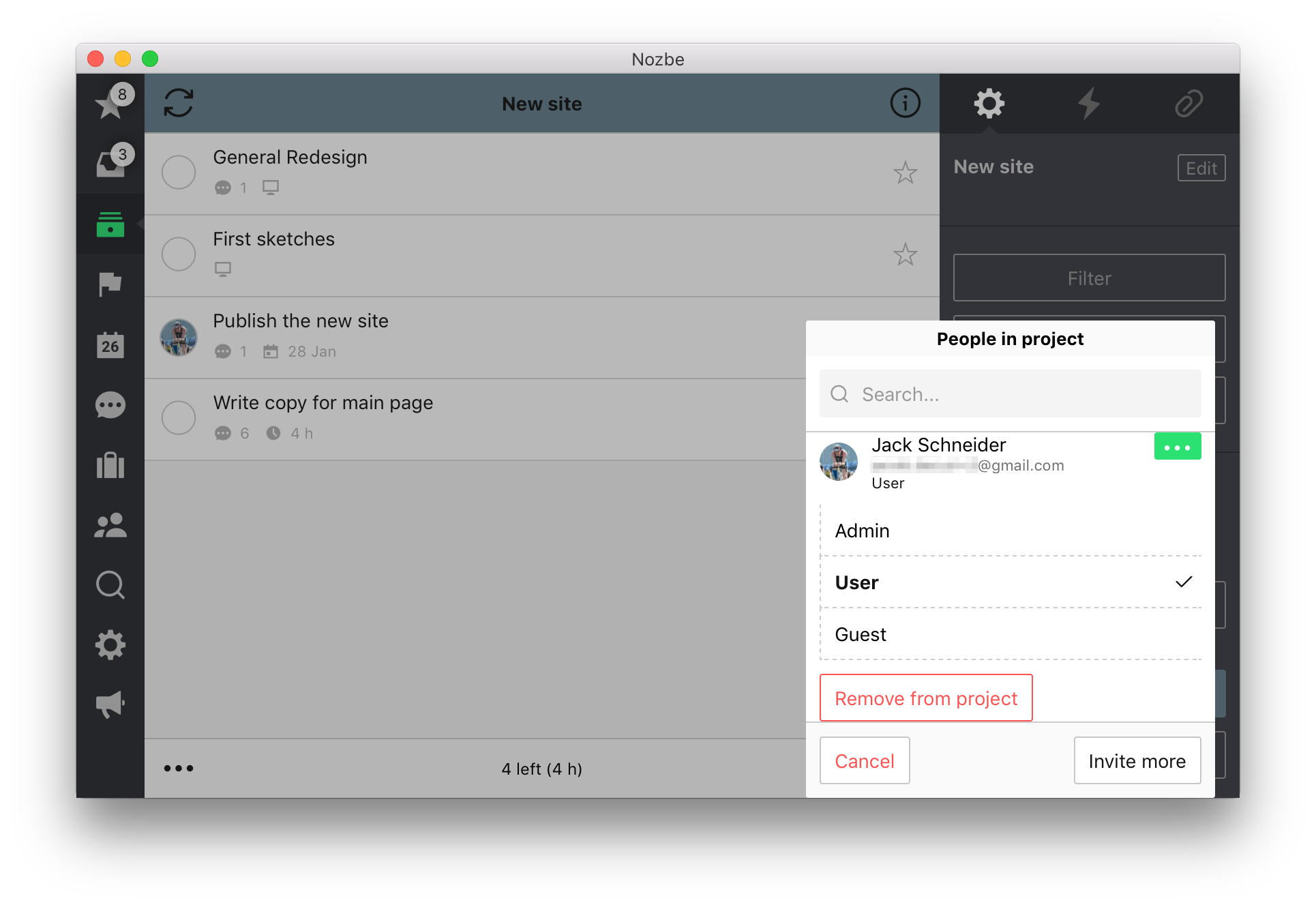 We are also bringing project roles into Nozbe 3.0: 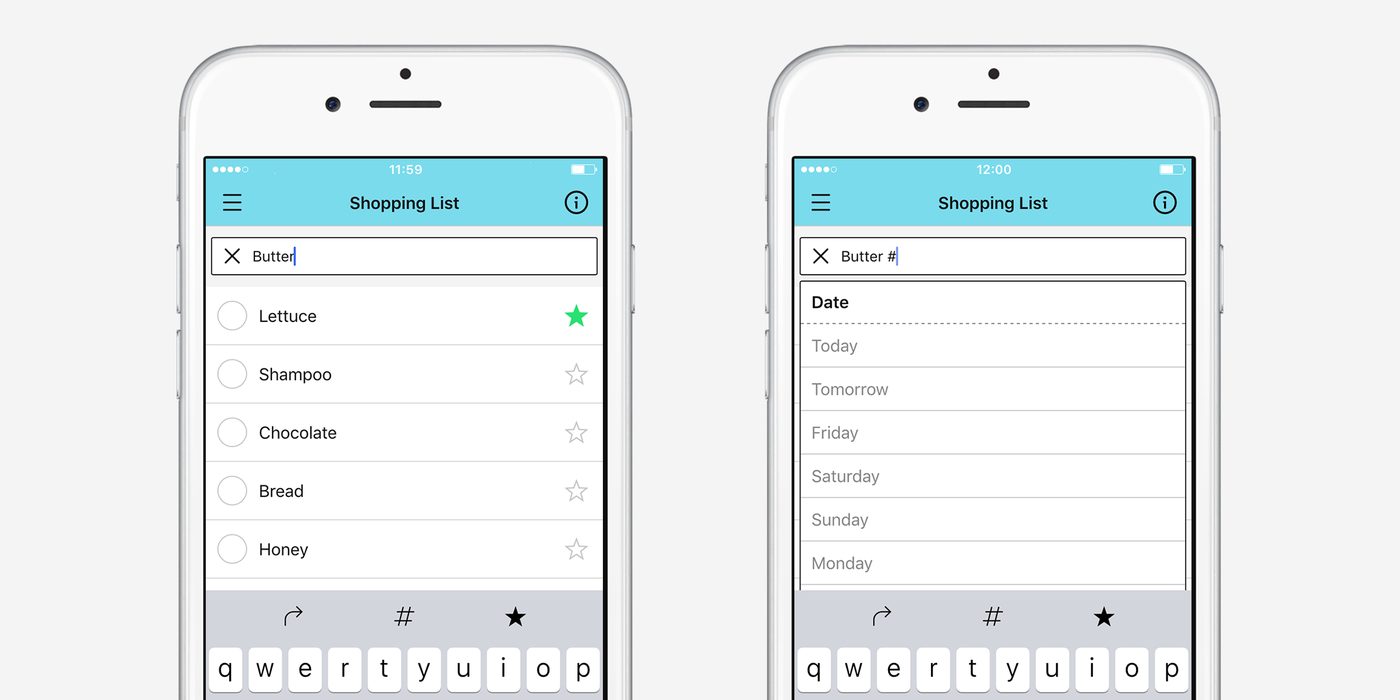 Nozbe on iPhone has a new cool feature we call the keyboard assistant. When typing in a new tasks, you’ll see 3 new buttons above the keyboard: 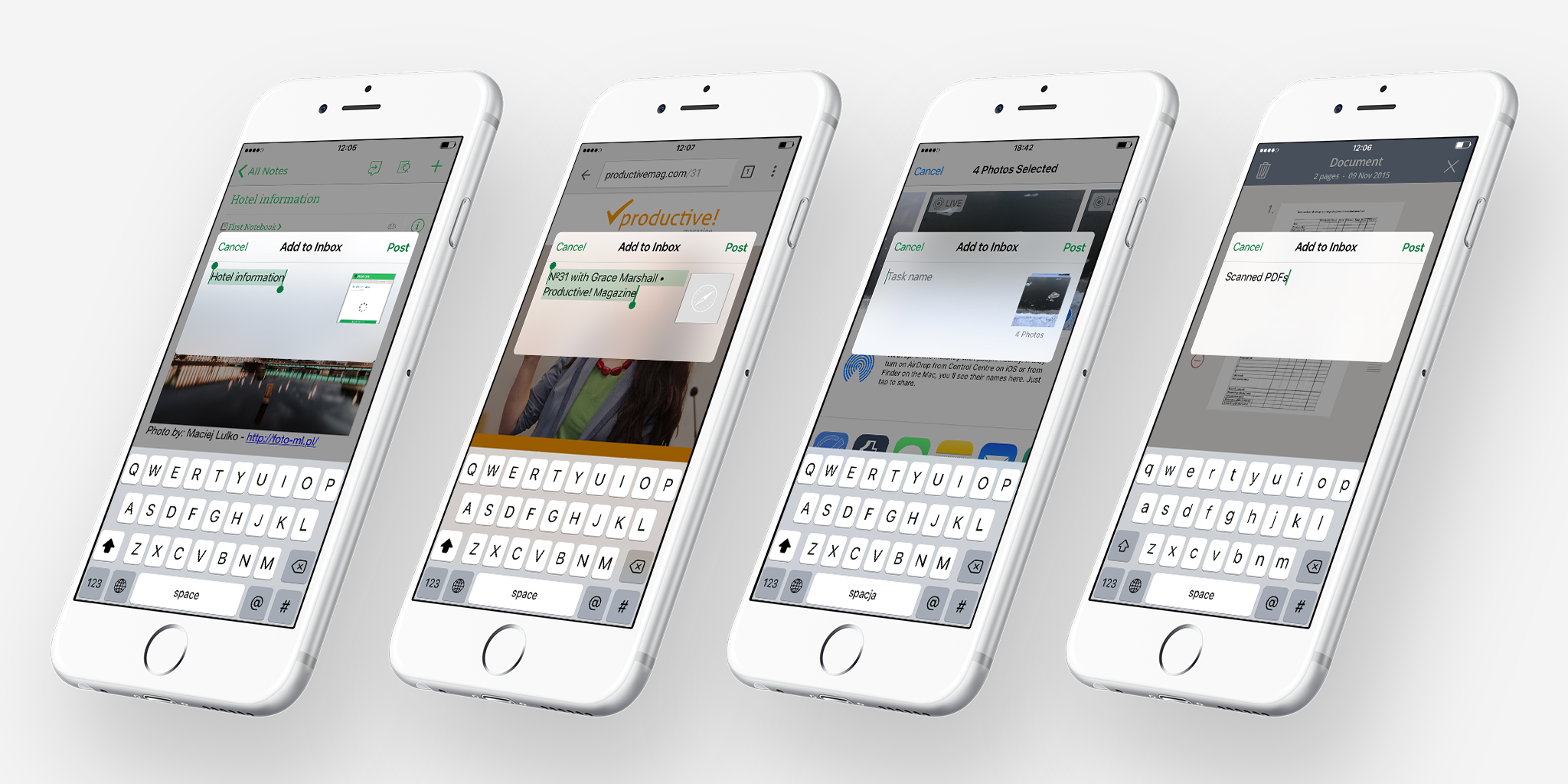 When iOS 8 was released in late 2014, we added a feature called “share extension” to Nozbe. Using it, you could easily add stuff from your device to your Inbox with the system share sheet.

The only problem was that it was limited to a single shared item and didn’t work in many popular apps, such as Evernote or Chrome. No longer. In Nozbe 3.0, the share extension should work with just about any app, and you can share as much stuff as you want. (For instance, you can add multiple screenshots from Photos at once.)

Pro-Tip: Use the hashtag notation to add attributes to the task with shared items, for example “Screenshots #marketing #tomorrow #1 h” 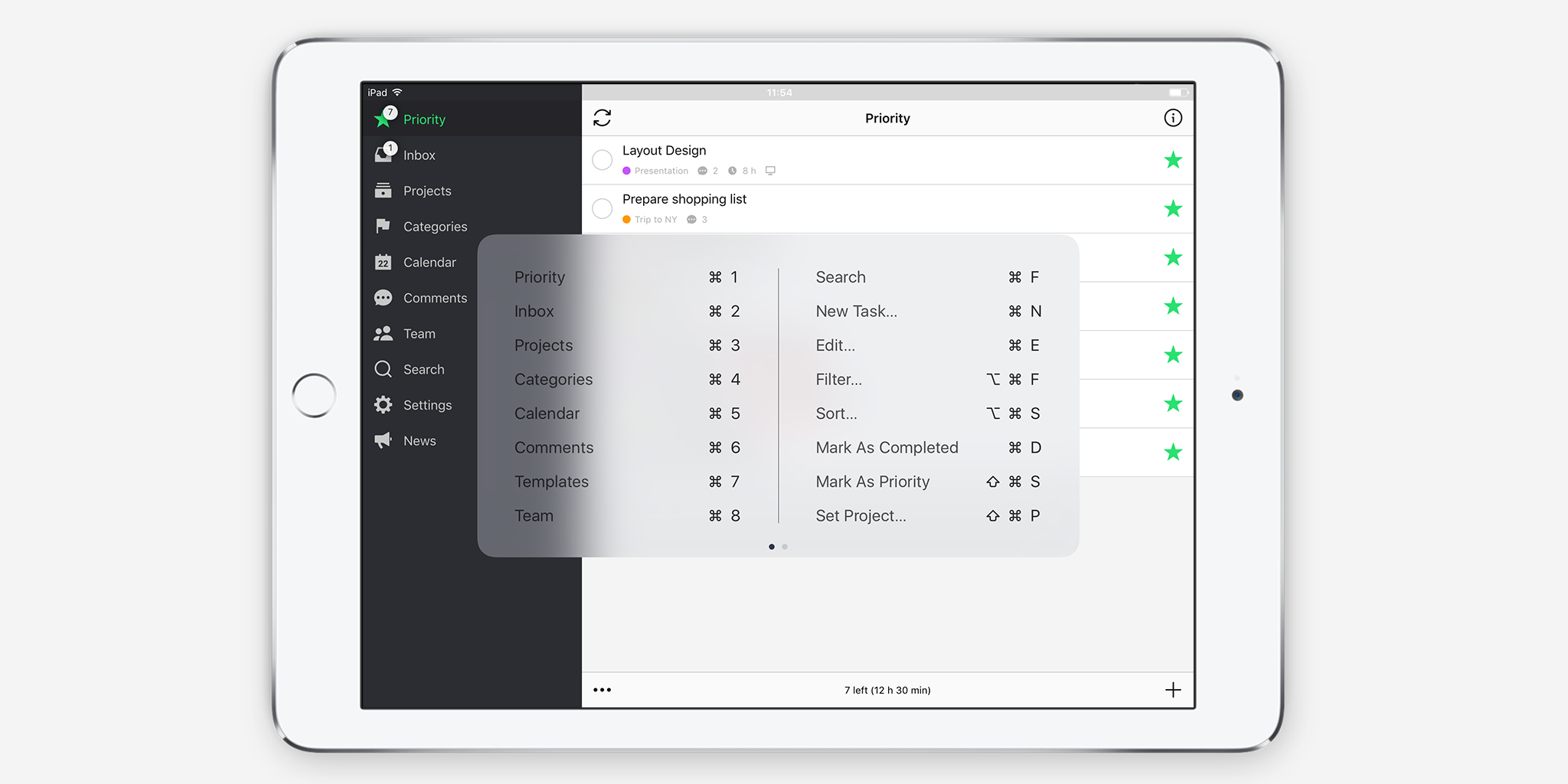 If you’re an iPad geek and use it for work with an external keyboard, good news. The keyboard shortcuts you know and love from our Mac app are now available on iOS as well.

Just press ⌘/Command key on your keyboard to see the list of available shortcuts, then blast away ⌘N’ing tasks, and ⌘⇧W’ing them to your coworkers!

(We also have a new shortcut: ⌘↑/⌘↓ to walk to the previous/next task on the list.)

PS. If you want to help us test the beta version of Nozbe 3.0 and catch any remaining bugs, go to our Test Blog.