2015 was the year that brought some new possibilities for automation on mobile platforms, especially on iOS. The beginning of 2016 is a good moment to tweak our workflows and make them even more effective.

In this blogpost, I will show you a few examples of how these automation tools can work with Nozbe. Thanks to our email integration, hashtags and Markdown support we can do some really cool stuff. Here goes:

Let’s start with something simple. As you may know from our podcast we use Github to work with code. AS a VP Product I often need to test new features in early phase or clarify some requirements for guys in the tech department. I get an email notification for every new comment added to our main repository. I have set up a rule to archive all of them right away and filter only those which contain my GitHub username. So now, I receive only notifications for an issue or a pull request assigned to me or my username mentioned in discussion. Thanks to Gmail rule they are automatically sent to my Nozbe email address and appear in my Nozbe Inbox as tasks.

That way I avoid having too many emails in my Gmail inbox and I get a new task in Nozbe when there is something new on GitHub that requires my attention. Then, I just open such a task and click on a link in a comment that takes me directly to a related location on GitHub. It’s that simple :)

Add new media from Android as a task in Nozbe

On a daily basis, I work on iPhone. However, as I am responsible for our product’s quality, I often test Nozbe on Android, too. I use Nexus 5 for that. While testing I take some screenshots and screencasts to visualize an issue or an idea I want to report to our tech team. I have set up an automatic upload of every new picture, screenshot and video to a dedicated Dropbox folder. Now, I need a link to an uploaded media to be added in Nozbe task automatically. We can use IFTTT for that. 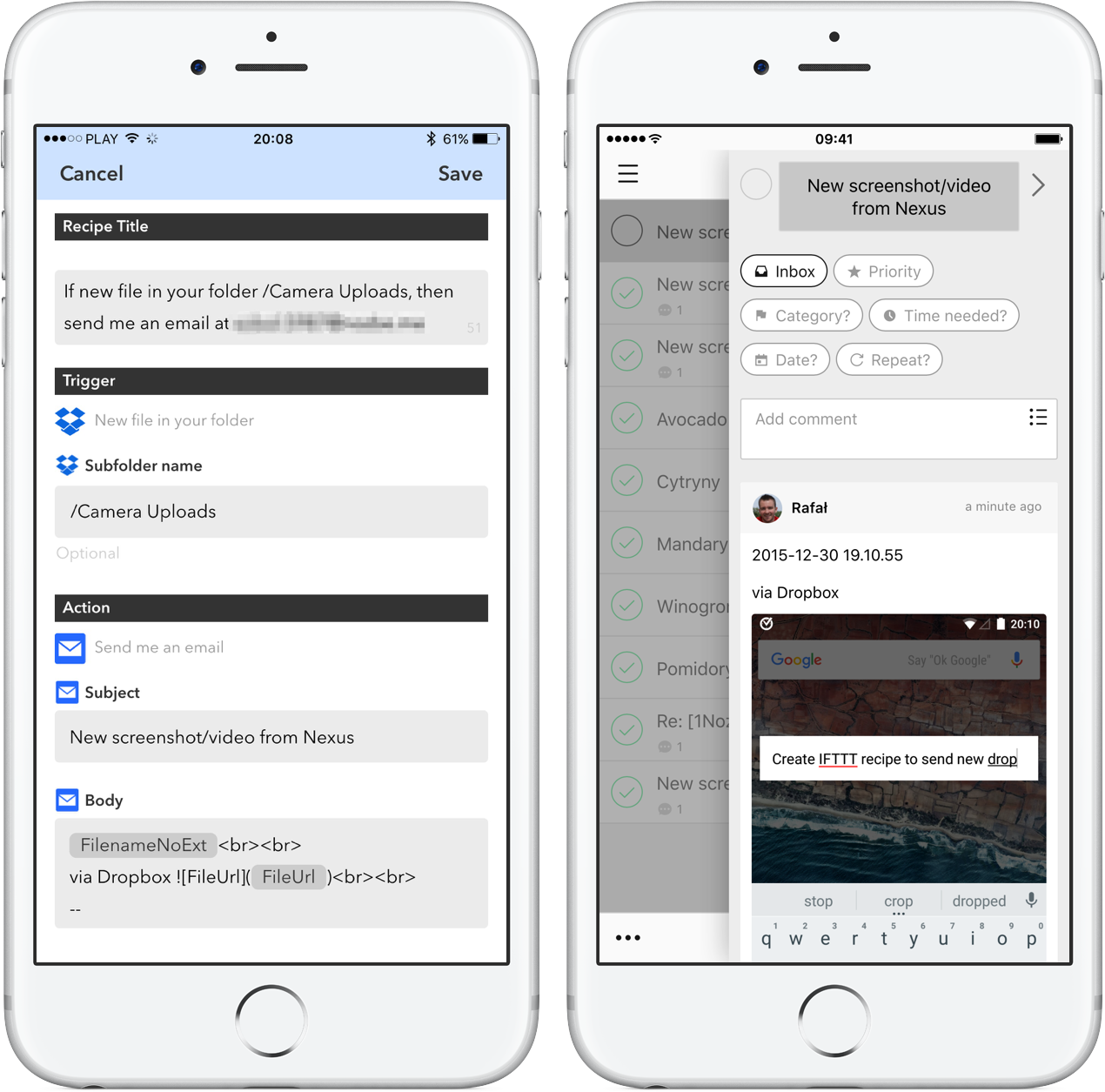 The recipe is simple: I just send a link to a file on Dropbox to my Nozbe email address. Note how I use Markdown tags - this way, we can see a screenshot preview as a comment in Nozbe. I also used a special “double dash” marker to cut off all of the noise that IFTTT adds to an email. Now, I have my screenshot in Nozbe Inbox and I can move the task to one of shared projects, provide my feedback in a new comment and delegate it.

This one is my favourite! ;) I always struggled when, while working on an important task on my iOS device, I’d notice a bug in Nozbe app that needs to be reported. I used to take a screenshot of it, go to Photos app, open the last photo taken and share it to Nozbe via the share extension or email it with a suitable comment. These steps would take 1-2 minutes and thus my concentration on the task I was working on was totally gone.

To improve my flow in such situations I could use the same method as I use on Android with Dropbox and IFTTT. However there is a great iOS app called Workflow which I can use instead. It allows me to do all the steps with just a single tap. So now, when I spot a bug in Nozbe app, I take a screenshot of it, open Today view on iOS and tap on “Report a bug.” It asks for the short description which I enter quickly and it is done! I can get back to work. When I finish with it I have a task called “Report a bug” on my Priority list in Nozbe. 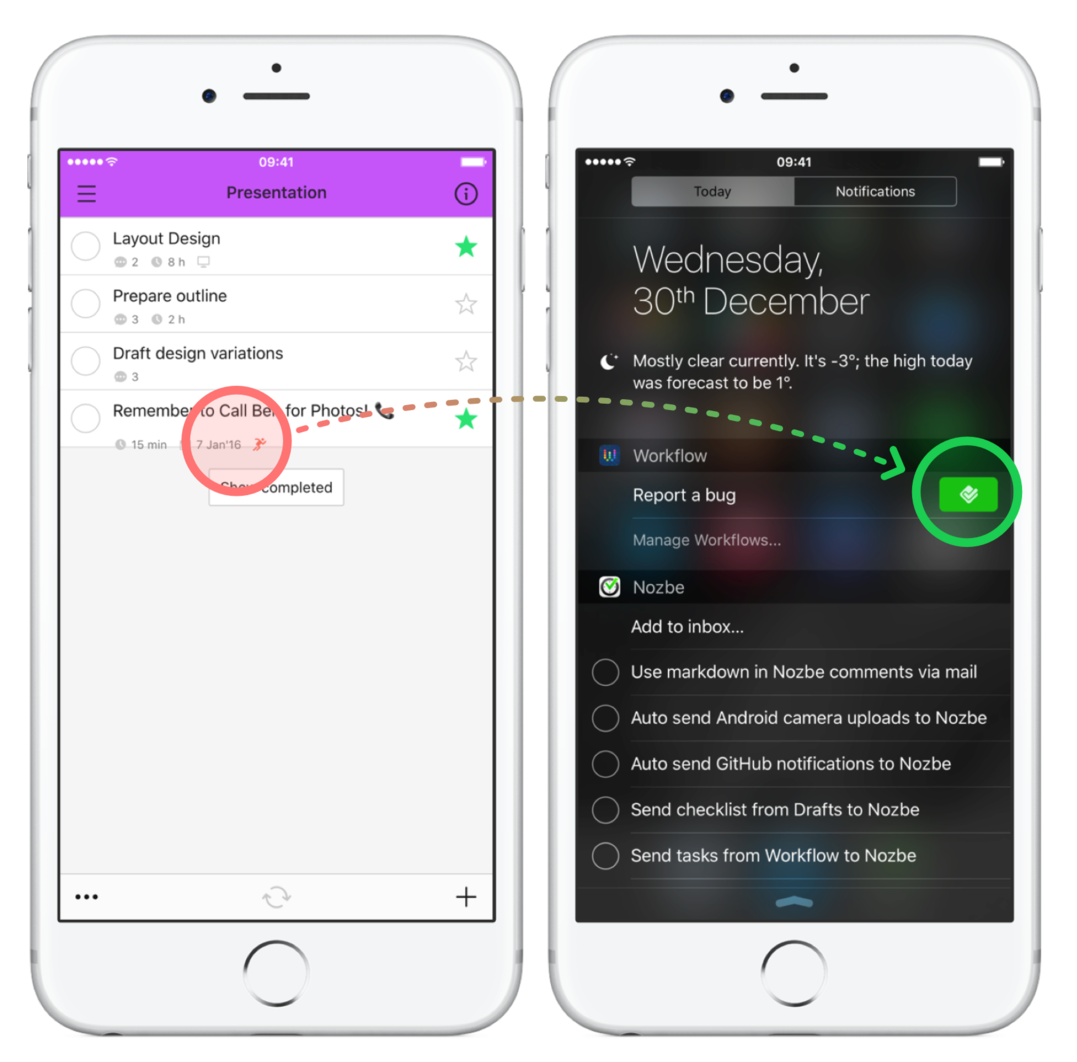 Here is the workflow I built to report bugs. In a nutshell it takes the latest screenshot, uploads it to Dropbox and emails to Nozbe. It uses hashtags to send it to a specific Nozbe project and my Priority list. Thanks to Markdown support, Workflow adds a comment to this task with preview of my screenshot and a link to Github. When I click it, it opens a new issue form in our repo filled with our issue template content. The link to the screenshot is already attached. All the reproductive job is done by Workflow for me :) 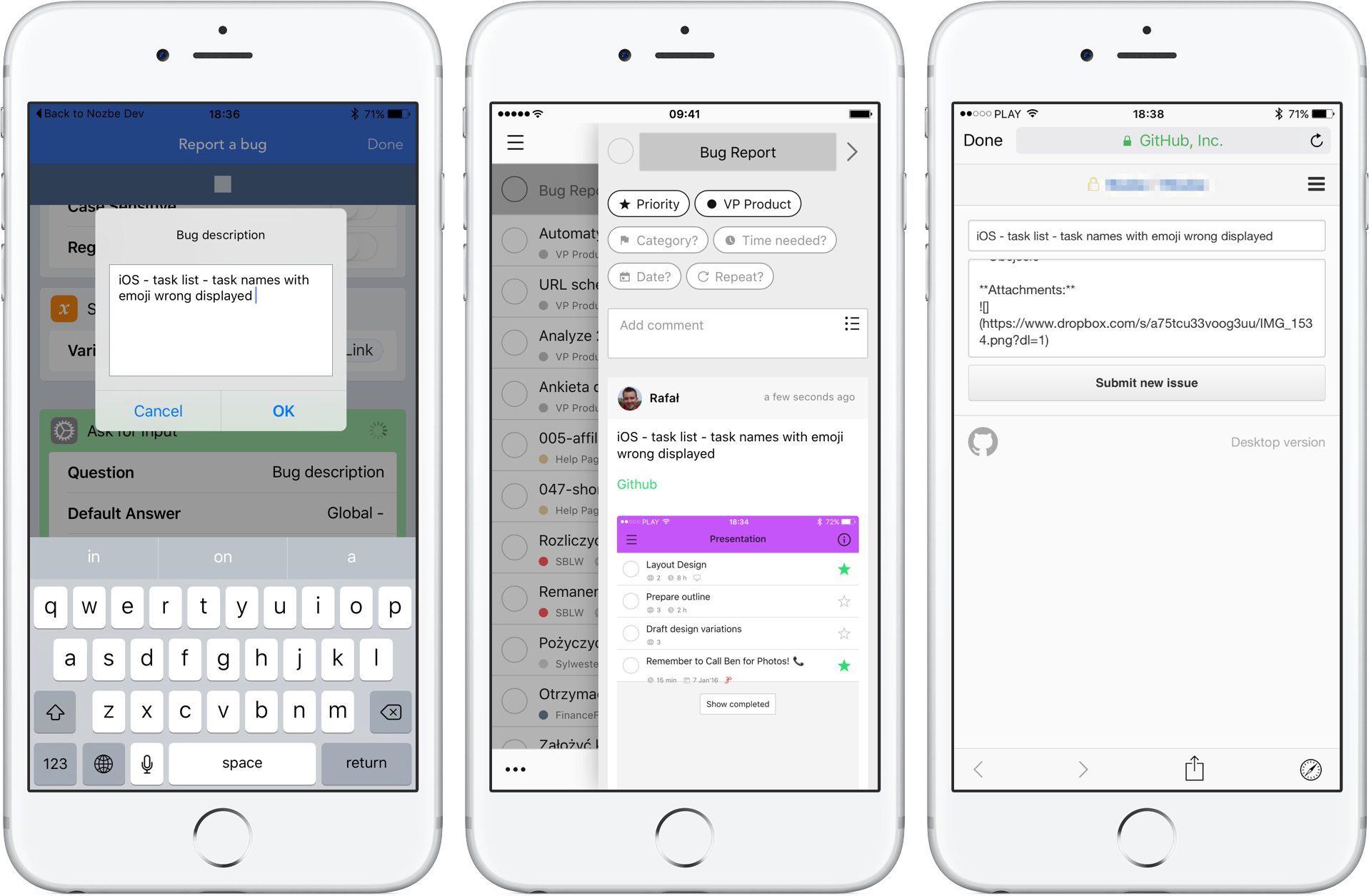 Grocery shopping with Drafts and Nozbe

I do my grocery shopping online once a week. As we all work from home it is much easier and more productive for me. I have a weekly recurring task in Nozbe for that purpose with a checklist of items I order every week and a link that takes me to the website where I can place my older. Sometimes, I need to order some additional stuff and I want to quickly capture these type of items to my weekly task in Nozbe. 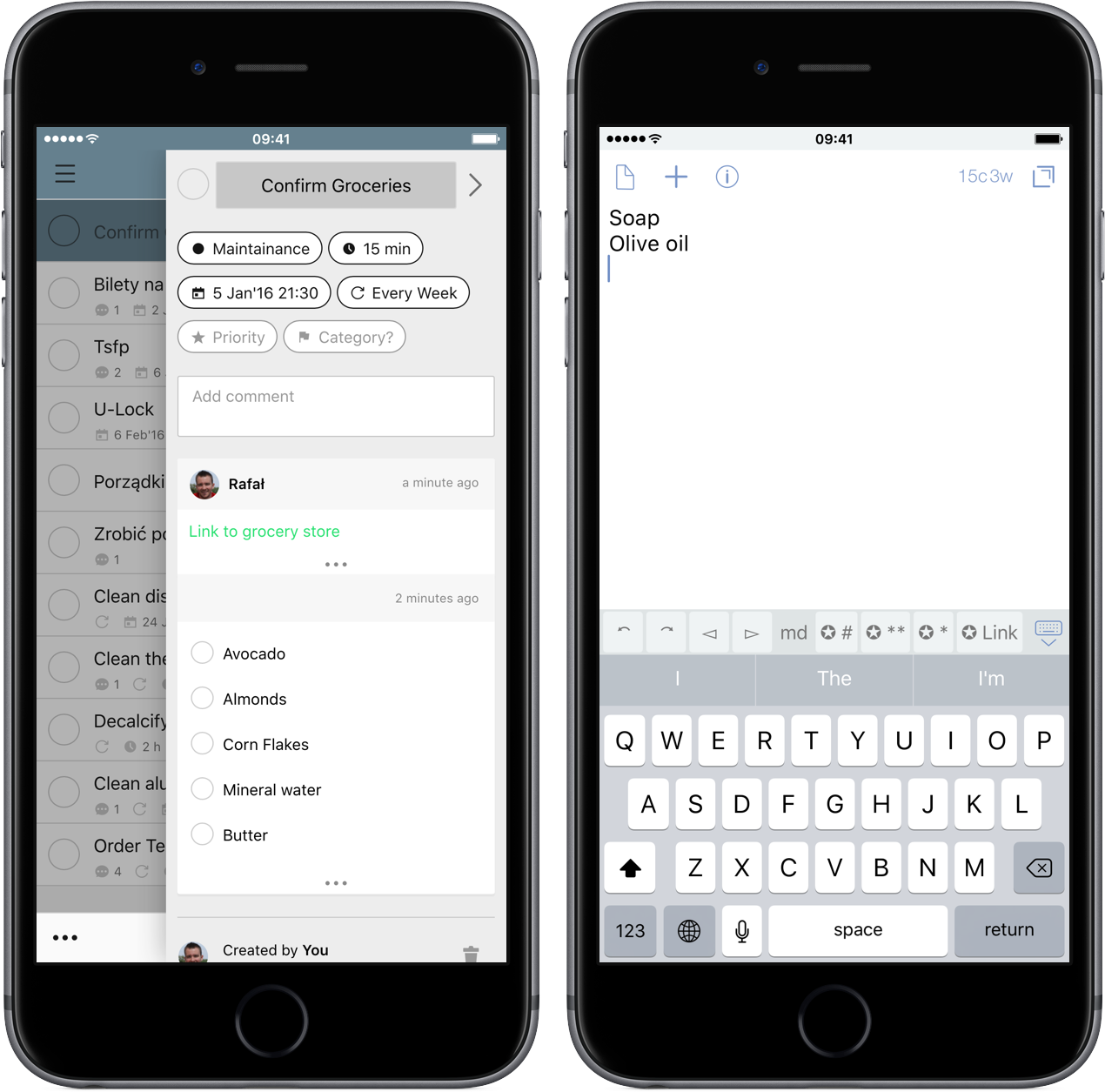 I use a cool Drafts app for that. It’s a tool designed to quickly capture a text and then send or share it to other apps. It also works great with Worfklow. I have defined two actions in my Drafts app that work with Nozbe. First one “Add to Nozbe” is very basic. It just takes what I wrote in Drafts and sends it to Nozbe. I use it for quickly capture ideas. Second action is called “Add to grocery list” and it takes my text input and runs this workflow. 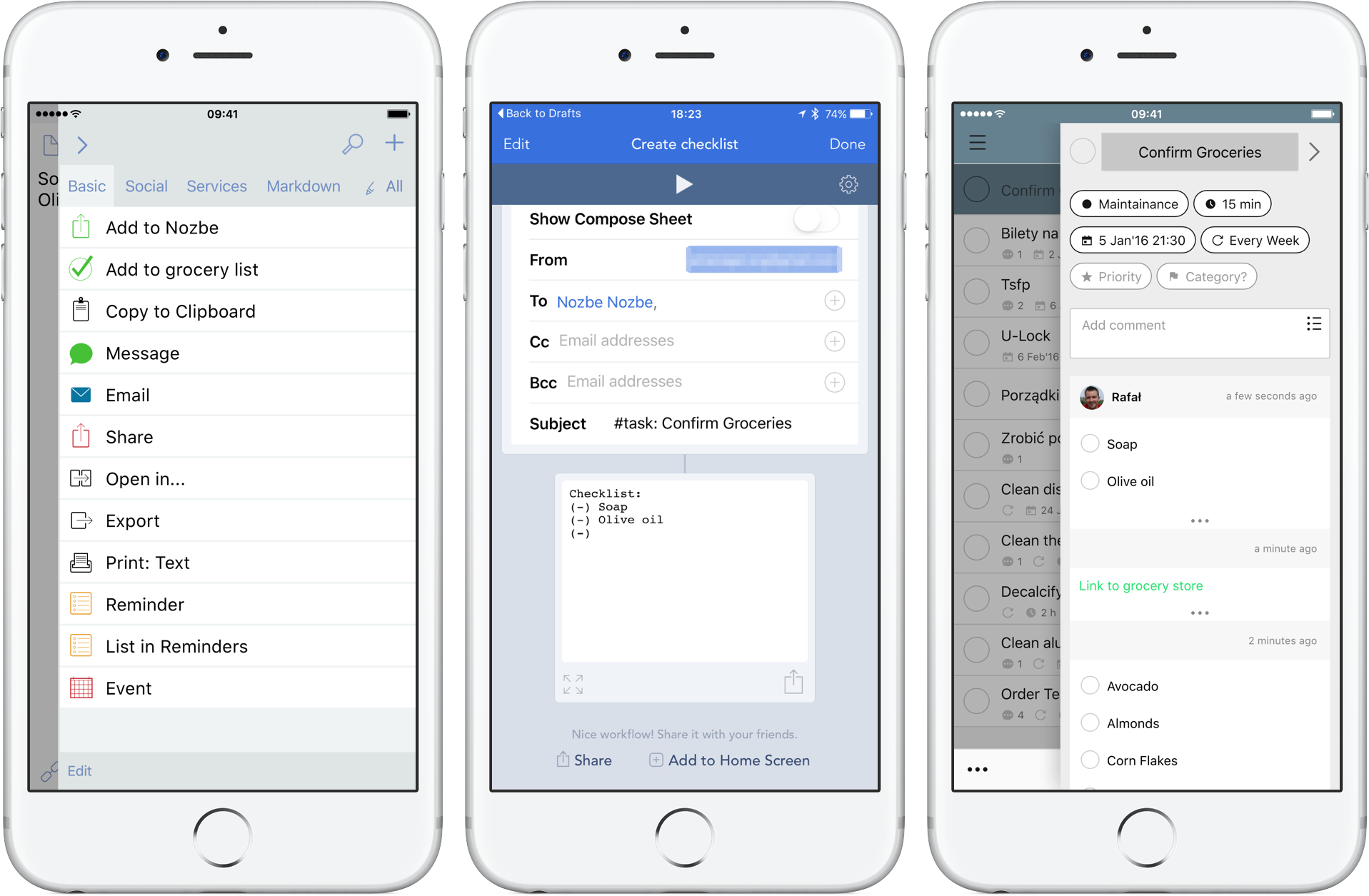 Every single line from a draft is sent directly to my weekly grocery task as a checklist. Lets say I am in the kitchen cooking and I notice that I will run out of olive oil soon. I just grab my iPhone, run Drafts, write Olive Oil and run Add to grocery list action. When it comes to order groceries it is on my checklist :)

Question: How do you use automation tools with Nozbe?